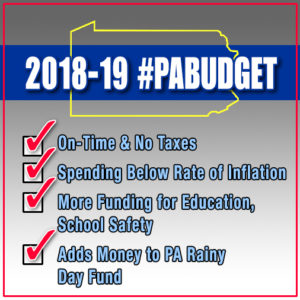 After several years of embracing conservative budgeting and rejecting Governor Wolf’s spending hikes, today we find ourselves on stronger financial footing than in any year in recent memory.

We are in better fiscal shape today because the budgets we have implemented in the past three years without the Governor’s signature have been much more responsible than his initial proposals that included $4 billion in new taxes.

The fiscally responsible budgets passed by the General Assembly the past three years were $5 billion less than the spending plans the Governor proposed.

Instead of multi-billion-dollar deficits, we now have a small surplus. That turnaround is a testament to the principles that have guided us through all of the recent years’ budgets – limited spending and avoiding tax increases.

The Governor originally proposed approximately $1 billion in new spending over the approved 2017-2018 budget, as well as new taxes on State Police services and Marcellus Shale.

Instead, we have crafted a plan with no new taxes, and we cut more than $270 million from the Governor’s original spending request, while still providing funding for important and critical services and programs.

The final spending total of $32.7 billion is just $560 million (1.7 percent) over the current year’s spending – below the rate of inflation, and well within the limits prescribed in the Taxpayer Bill of Rights. 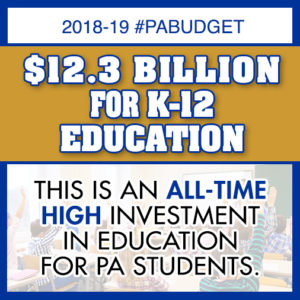 A significant part of the additional spending is devoted to education. The budget increases funding for Basic Education by $100 million, Pre-K Counts and Head Start by $25 million, and Special Education by $15 million.

Higher education is also a priority in the budget. State System of Higher Education funding will increase by 3.3 percent, and funding for state-related universities will increase by 3 percent. Community colleges will also see a 3-percent boost in funding.

The budget includes an additional $30 million for Career and Technical Education to ensure Pennsylvania’s workforce keeps pace with the demands of the labor market. 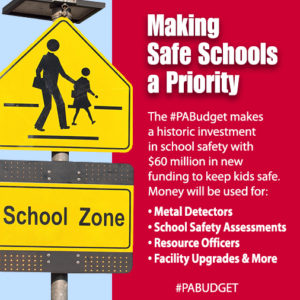 The budget makes a historic investment in school safety with more than $60 million in new funding for school resource officers, security equipment and other proven methods of preventing school violence.

Part of the challenge in addressing school safety is the fact that every school district is different and has its own unique needs and circumstances. There is no one-size-fits-all approach.

The additional funding for school safety grants will allow each school district to evaluate its needs and vulnerabilities and apply for funding to shore up any weaknesses that exist.

The key is flexibility. We are not creating any kind of ineffective or impractical government mandate; instead, we are providing the resources and the opportunity for the state and school districts to work together to meet the needs of students.

While the funding is critical, we are fully aware that just throwing money at the issue won’t solve the problem alone. The new money is just the beginning, not a conclusion.

Several measures have already been introduced to protect students, and our School Safety Task Force is still developing additional ideas to keep our kids safe.

The Governor’s original budget plan would have gutted a number of critical agriculture items. Thankfully, we were able to restore those proposed cuts to programs like Spotted Lanternfly Control, Agriculture Excellence, Agricultural Research, Hardwoods Research and Promotion, Food Marketing and Research, and more.

In total, programs under the Department of Agriculture will receive $10 million more than the Governor’s original request.

The budget not only restored Governor Wolf’s proposed $8 million cut to tourism marketing, but actually increased funding by nearly $5 million over the previous year’s total.

The Governor proposed to cut funding to the Department of Community and Economic Development by nearly $22 million. Instead, we increased funding for these job creation and community improvement programs by more than $11 million.